In my previous article, I discussed three common limiting beliefs that will either put you in debt or keep you there.  The beliefs that…

All of these limiting beliefs have one thing in common – they are false. If you believe them you’re probably limiting your ability to become financially independent. 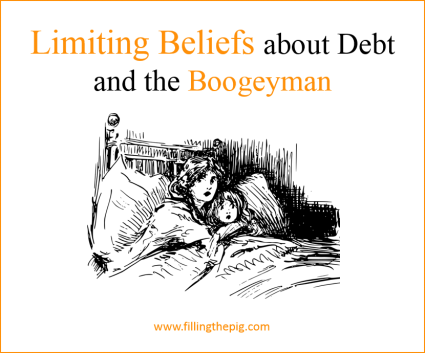 A Quick Re-cap On What Self Limiting Beliefs Are?

Self-limiting or limiting beliefs are beliefs that may be established during childhood, through our work experiences, life events or the relationships we have with friends and family.  The beliefs are generally opinion based rather than fact-based. And maybe a result of the misunderstanding of a specific topic.  As time goes on these beliefs are reinforced by our individual emotions and behaviors, so the beliefs become stronger even though they may not be completely accurate.

Centuries ago the belief that the world was flat kept sailors confined to their own geographic locations. They only ventured out on to the ocean as far as they could see.  The fear of falling off the edge of the earth limited their ability to explore, and to experience different cultures and continents. Of course, the world isn’t flat and once this belief was demystified, explorers like Christopher Columbus and Hernan Cortes discovered new civilizations.

The Boogeyman – A Limiting Belief

On a lighter note, and a bit more 21st century, when we are children the fear of the “boogeyman” and things that go “bump in the night” represent real fears and threats. These fears are our first experience with limiting beliefs.

When you were growing up how often did you jump from the bed to avoid being grabbed by the mythical beast lurking underneath? Or maybe, before you went to bed you made sure the closet door was closed so that whatever was inside couldn’t get out.

Of course, over time we learn that the boogeyman is only a figment of our imagination and we overcome the fear because we learn to think rationally and differently about this limiting belief. In addition, mom and dad helped reinforce the right emotions and behaviors to help us overcome the belief. Overcoming this belief allows us to sleep better at night. We no longer worry about the boogeyman monster. And overcoming our fears builds confidence.

When it comes to money, some limiting beliefs can be detrimental.  Your beliefs about money may keep you in debt, not allow you to save money or keep you from making more money.  Overcoming these beliefs can be the difference between success or staying stuck in your current situation.

#1: There is Plenty of Time

This self-limiting belief is prevalent when we are younger and less experienced with money. It’s a perspective that somewhere down the road we will make more money, correct our spending habits and then get out of debt.

If you’re in debt, “plenty of time” allows you to forego the uncomfortable process of being frugal and budgeting your money. It allows you to avoid the feeling that you have to give something up.

At the end of the day, “plenty of time” is about procrastinating.

If you’re in debt you already know you’re paying high-interest charges that are probably crushing your budget. The monthly payments are forcing you to spend money you don’t have. In addition, your debt is probably creating a whole bunch of stress. It’s limiting your ability to really do the things you want to do.  It’s impacting your emotional well-being, the choices you can make, the opportunities you have.

To overcome this limiting belief requires a different approach.

An approach that comes from the perspective that although you have plenty of time, you want to make the most of it. And making the most of it isn’t just about money or time. It’s about improving the future and your overall lifestyle.

Being able to shift this limiting belief from one of “there’s plenty of time” to a belief that is more immediate and has a sense of urgency, something like –  “I am sick of all this debt and I want to get rid of it NOW!” It’s about looking beyond the negative financial impacts debt has and thinking about the other areas of your life. Areas that will be positively impacted when your debt-free. Your confidence level, your behaviors, the other facets of your life.

To some degree this is true. If you read any of the latest statistics on credit card debt, the average American household carries a balance of almost $6,800 (NerdWallet 2018). Factor in car loans, student loans and personal loans and it’s easy to lump everyone into – “the everyone has debt category.”

The problem with this limiting belief about debt is that it’s only partially true. There are a lot of individuals/families that don’t have debt, or the only debt they have is a home mortgage. If “everyone has debt” is an average, then it’s safe to say there are a whole bunch of people that are above average and don’t have debt.

Everyone has debt is a limiting belief because it allows you to normalize your current situation regardless of how bad it is. It keeps you operating in the same credit charging, spend at will, must have this and that debt cycle. It keeps you from paying off the balance on your credit cards, only making the minimum payment. In a way, everyone has debt is a form of herd mentality. If everyone is doing it then it must be ok.

If you’re struggling with debt this limiting belief allows you to feel ok about your current situation. It helps remove any feelings of regret. Helps minimize the stress associated with high debt balances and minimum payments. Unfortunately, if you’re in debt, it also keeps you stuck.

To overcome this limiting belief about debt.

Understand that “everyone’s” financial situation is different. The money they make, the debt they carry, the lifestyle they live. Recognize that the other half of the debt equation is – everyone does not have debt.

The everyone does not have debt belief will help motivate you to take action, keep you from being stuck and allow you to create a lifestyle you love. Without all the anxiety and stress associated with debt..

#3: It Will Take Me Forever to Pay Off My Debt

Combine “forever” with “debt” and this limiting belief can single-handedly suck any positive emotions you may have right out the window.  And leave you thinking, why even try and get out of debt. Why even try to get started.

This self-limiting belief works like this. As you make your monthly payments on your debt you regularly see what you’re paying per month. The balances left to pay and the interest rate you’re paying  In your mind you do the math and realize it’s going to take a very long time to pay off your debt, i.e. forever.

Receive $100 off the purchase of a new TV that would be great. Win $100 from a lottery ticket that would be awesome. Live to be 100 even better.

100 months to pay off your debt – not so good. In your mind 100 = Forever. Fortunately, this is a belief can be easily overcome if you look at it from this perspective.

How to overcome this limiting belief.

First, understand that regardless of how you got into debt, debt is never a lifetime sentence. You just have to be realistic about what you’re trying to accomplish.  You can’t spend five years racking up debt and expect to pay it off in two months. It will take some time, but it’s not forever. Setting the right expectation for yourself when your tackling debt is an important aspect of staying motivated through the process.

Second, understand the facts about paying off debt and how you can expedite the process of becoming debt-free. For example, if you can pay more than the $50 minimum per month, here is the impact on $5,000 of debt.

To keep it simple I have not included interest charges in this example, however, the impact to expediting your debt payoff is the same. Pay more than the minimum and it decreases the years to pay off the debt.

As a means of expediting the pay off of debt I highly recommend using the Snowball Method.  It’s simple to understand, provides an emotional boost as you make progress and it debunks the “It will take me forever to pay off my debt” limiting belief.

All of these limiting beliefs about debt are false. However, they have a tendency to work together and inevitably create an environment where even getting started on your debt pay off plan can seem overwhelming. These beliefs create a negative thought process that has no end. They lead to procrastination, frustration and are an emotional brain drain. Unsurprisingly, if you find yourself trusting these beliefs it’s likely your financial situation hasn’t changed since last year, nor will it change in the future.

Many have fallen into the debt trap and worked their way out and created their own financial independence – you will too. The next time these limiting beliefs surface and keep you from charting a course to debt-free living – challenge them. Don’t let these beliefs keep you from creating a debt-free lifestyle of opportunities. 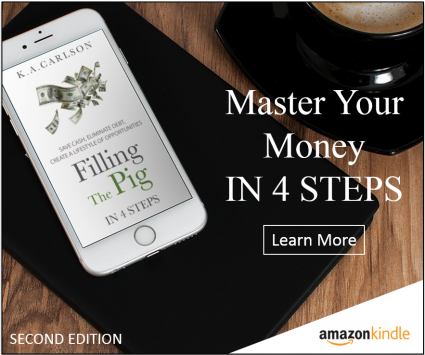 Kevin is the owner of FTP and the author of the personal finance book series Filling The Pig. He uses his past successes and failures with debt, saving cash, investing and running home-based businesses to educate others about successful money managment and Creating a Lifestyle of Opportunities.

Filling The Pig is a participant in the Amazon Services LLC Associates Program, an affiliate advertising program designed to provide a means for us to earn fees by linking to Amazon.com and affiliated sites.