I recently watched the HBO documentary Panic: The Untold Story of the 2008 Financial Crisis. The documentary discusses the events surrounding the cause of the 2008 crisis. And the sequence of events that the government took to prevent an economic collapse. It’s a great documentary that provides new information and sheds light on the event. It helps to demystify a lot of the public’s misperception surrounding the Troubled Asset Relief Program (TARP) or more often called “corporate bailout”. Right now your thinking, boring – someone actually watches this stuff. But wait, the financial crisis is a great lesson in controlling your own destiny and creating financial independence.

Watching the documentary took me back to those turbulent years during and after the crisis. It caused me to reflect on the state of my own finances at that time.

Back then a lot of Americans were struggling financially due to the recession. Fortunately, my wife and I had created a pretty stable financial situation for ourselves. An environment that provided financial independence while we weathered the storm.

Is Financial Independence All About Early Retirement?

For some, financial independence is a mantra for retiring early. In fact, it has become such a movement that the term FIRE is often used – Financial Independence Retire Early. 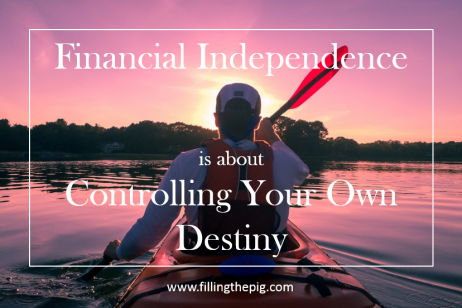 External Forces and Your Finances

In my eBook Filling The Pig – In 4 Steps, I discuss internal and external forces and how they can influence your finances.

External forces are “things” that impact your finances but you have no control over them. For example:

The 2008 Financial Crisis was a prime example of an external force. The crisis was created by years of high-risk subprime mortgage loans that cascaded into bank failures and eventually drove the economy into a recession.

The average American had no control over these events. However, for many, these events directly impacted their finances. The crises and state of the economy left many feeling vulnerable and exposed.

It has been 11 years since the crisis. Adults in their 20’s and 30’s probably don’t even remember the impact the crisis had on the economy. As a recap, the economic environment in 2008 and 2009 looked something like this.

Entering 2009 the US economy was officially in a recession. For many households, the recession created financial hardship and stress. People lost their homes, jobs, and investments. Many were unable to control their own destiny.

However, what many individuals saw post-2008 as a scary, uncertain time, my wife and I saw as an opportunity.

Both of us were secure in our jobs.  The only debt we had was our mortgage. We had accumulated a significant amount of cash in our savings account – from years of saving. The cash we had saved provided us with a sense of security and most important choices.

Late in 2009 and again in 2010, we purchased two foreclosures. We renovated them and then flipped them. In addition, we purchased a new house and rented our other house.

In each case. The stability and security provided by our finances allowed us to not only manage through the crisis but provided us with the opportunity to invest in real estate.

What I Learned From the 2008 Financial Crisis

Looking back, our brief stint in real estate proved to be very profitable, and a lot of fun. But that’s not what I learned from the 2008 Financial Crisis.

What I learned was that financial stability and the independence we had created allowed us to control our own destiny. The ability to write our own story during some very bad economic times.

External forces like the stock market, housing prices, interest rates, global economies are beyond anyone’s control. However, the one thing we can control is how we manage our money.

If you can create an environment that helps insulate you from all the unpredictable, uncontrollable external forces. The things that can negatively impact your finances, your home, and your family – then financial independence becomes your mantra for controlling your own destiny.

Consider these three aspects of your finances if you want to control your own destiny, regardless of what the rest of the world is doing.

If history is any indication, global economies and financial markets will continue to ebb and flow. That’s how economies work. Events like the 2008 Crisis generally happen every ten to fifteen years.

The best thing you can do to buffer yourself from these types of external events is to manage the things you can control – your savings account, your debt and how you invest. Once you master these elements of your finances then you can create your own definition of financial independence and control your own destiny. 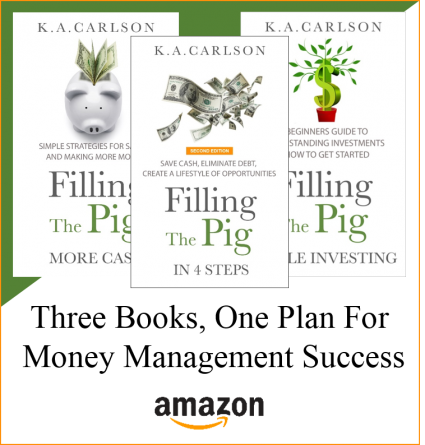 Sign up for a Kindle Unlimited 30 Day Free Trial and read the complete Filling The Pig finance series of books for free.

The Art of Being a Cheapskate - How I Successfully Manage My Budget
Understanding Term Life Insurance – Protecting the Ones You Love
How to Stop Procrastinating and Get Out of Debt, Are You Carrying Sandbags?
Best Identity Theft Protection Services

Kevin is the owner of FTP and the author of the personal finance book series Filling The Pig. He uses his past successes and failures with debt, saving cash, investing and running home-based businesses to educate others about successful money managment and Creating a Lifestyle of Opportunities.

2 thoughts on “Financial Independence is About Controlling Your Own Destiny”

Filling The Pig is a participant in the Amazon Services LLC Associates Program, an affiliate advertising program designed to provide a means for us to earn fees by linking to Amazon.com and affiliated sites.